I’ve been lagging on these posts, but it’s time to get it done. I’ll do a series of posts that show the before and after pictures of certain rooms in the Henry Home Condo. I’ve slacked off on virtual house tours on this blog since we’ve already had a house warming party and many of you have already seen it first hand. But for the sake of me wanting to look back on this in the future, and for the sake of being consistent, here’s the first part of the Virtual Home Tour.

Here’s a picture I took of our kitchen on the day we got our keys.

The kitchen was simple and basic when we got the condo. Everything worked. Actually, we haven’t changed too much on it appliance-wise. There’s still a lot we plan to do with it but that won’t probably be until later next year. But! I don’t want to undermine all the work we did on the kitchen. I think this room took the longest to spiff up.

We began the kitchen journey by painting the walls white. There’s not much wall to see but it was previously a peach color (see first picture).

Then, we bought a fridge. This was a tiring search. The fridge also broke down three times in the first month we got it. Lots of our food went bad and there was a lot of eating out, but eventually the third time was the charm and the repairman fixed the refrigerator. Thank goodness for warranties! 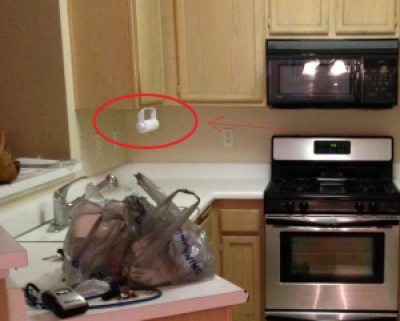 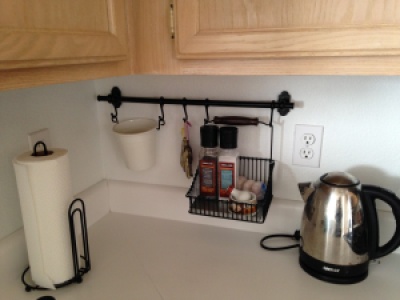 We then added this cute little caddy holder we bought from IKEA (IKEA ftw!).

While the inside of the cabinets were white (because I insisted we painted them), I wanted to give it a bit of a pop. I knew I would be spending a lot of time in the kitchen, so I wanted to be able to open a cabinet and feel happy instead of bored about dishes. So, I lined the back of my cabinets with colorful gift wrap! (See below picture)

This was a process of measuring, cutting, and taping the wrapping paper to the back of the cabinets. It didn’t help that on the day that I did this, it was very humid and the double-stick tape wouldn’t hold as well. However, the end result made me happy. I also added liners to the bottom. They’re not pictured here but you’ll be able to see them in the final end result photos.

Then came the part I had been anticipating. Since way before house searching, I had always fantasized about having a white kitchen. We didn’t have the money to reinstall completely new cabinets so we decided to just paint them. We waited to paint the kitchen cabinets until we were all done painting our entire condo (seriously, we painted every wall of our condo).

Husband unscrewed all the cabinets and sanded down the wood surfaces. We did it in two parts: the upper cabinets first, then later the bottom cabinets. 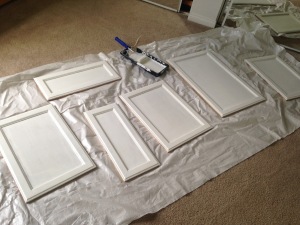 While the top cabinets dried, we laid out a mat in the guest room where I painted the cabinet doors during the day.

This was a painstakingly slow task. Mostly because I didn’t realize how many layers it took to get the cabinet doors painted. Not only that, but sometimes we would have to re-sand in between painting the layers to get the paint even on all sides. Even thinking back to this task has made me exhausted. It took forever.

But you guys, once we finished painting all the cabinets and put the doors back up, it was beautiful. We bought simple black knobs from IKEA. I noticed that since the last owners didn’t have knobs, there was a lot of wear-and-tear as well as grime around the places their hands touched most. I didn’t want to take the chance on making our clean, newly painted cabinets dirty so we installed knobs. Plus, the black knobs add a touch of class.

I love how our kitchen looks like now. There’s still a lot that I want done to it. For example, I have a frustrating relationship with the white countertops. I don’t even know what material it is but it stains so easily and I find myself having to bleach it weekly. The sink is not stainless steel nor is it a deep sink. We also still need to change out the microwave and add a tile backsplash. However, despite all that, I am content at its current state. Also, the kitchen is such a big project that we are content taking time off from doing any renovations on it.

Without further ado, here is the current state of our kitchen!

Story: We bought these stools from Craigslist for $5. Husband spray painted them white and my mom-in-law helped us reupholster them with this fun fabric. 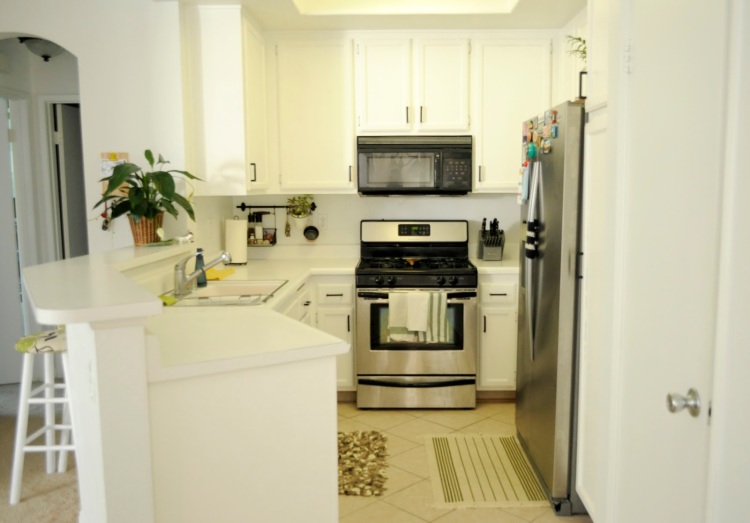 This concludes The Kitchen part of the Virtual Home Tour!

View all of Katrina's posts.

This error message is only visible to WordPress admins